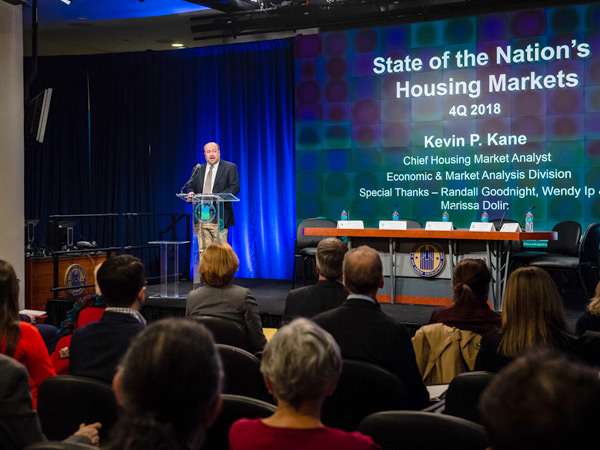 The March 20 PD&R Quarterly Update featured a discussion of the state of the nation’s housing markets in the fourth quarter of 2018.

For nearly a decade, HUD’s Office of Policy Development and Research (PD&R) has hosted a regular public event — the Quarterly Update — at HUD Headquarters in Washington, DC, to announce its latest findings on the state of the U.S. housing market and convene expert panels to discuss timely issues in urban development. Each session kicks off with a summary of the latest U.S. Housing Market Conditions report, which highlights key statistics and trends in the housing market, including housing starts and completions, home sales and prices, rental affordability, and mortgage interest rates. To understand current housing market conditions, PD&R compiles and analyzes data from HUD as well as from the U.S. Census Bureau, the National Association of REALTORS®, the Federal Housing Finance Agency, the Mortgage Bankers Association, the U.S. Bureau of Economic Analysis, and other sources.

Following the discussion of the housing market, an invited panel of experts participate in a moderated discussion organized around a housing- or community development-related topic. The Update is an opportunity to showcase PD&R’s role in fostering emerging research and ongoing debates among housing scholars and practitioners while giving the public the chance to engage with leading voices in the field. Past speakers have included scholars, housing officials, developers, and policy experts. At these roundtables, the various perspectives offered by panelists with diverse backgrounds ensure a thorough, well-rounded discussion.

Launched in summer 2010, the Quarterly Update has covered a range of topics. In June 2013, a panel of practitioners discussed solutions to the problem of how to preserve existing affordable rental housing, a topic of continuing relevance at a time of increasing housing costs. In the fall of 2016, the Quarterly Update highlighted the Family Options Study, a comparative look into the long-term outcomes of different housing and services interventions for homeless families. These and other Quarterly Updates are archived here, many with a video recording of the event.

More recently, PD&R used the September 2018 Update to highlight HUD-sponsored research examining the role of landlords in the success of the Housing Choice Voucher (HCV) program. In this case, the Update represented one part of a broader HUD effort to understand the dynamics underpinning the on-the-ground functioning of the HCV program; the Winter 2019 edition of HUD’s Evidence Matters magazine also focused on this important topic. At this event, researchers presented their preliminary insights into the factors influencing landlord participation in the HCV program, a representative from the District of Columbia Housing Authority shared his agency’s outreach efforts to landlords, and a longtime investor in affordable housing discussed how his firm increased its experience working with voucher holders and local housing agencies. In addition, the event served to launch HUD’s nationwide listening tour to elicit landlords’ perspectives on the HCV program.

Although the Quarterly Update offers a venue for HUD and the public to discuss issues and research, PD&R also encourages public input into the research agenda itself. Currently, PD&R is engaged in developing its second 5-year Research Roadmap, a living document generated through public engagement that helps set strategic research priorities for the office. The Roadmap helps ensure that research will be relevant to the people and organizations working on the front lines to advance affordable housing and stronger communities. This latest effort was announced in March 2019, with the Quarterly Update serving to launch this component of HUD’s Strategic Plan 2018–2022.

The series continues to focus on current issues affecting urban development in the United States. In June, PD&R will hold its next Quarterly Update, which will discuss Opportunity Zones. Created by the Tax Cuts and Jobs Act of 2017, Opportunity Zones are census tracts in particular need of private investment; tax incentives created by the act are intended to promote private sector economic development and job creation in these areas. Panelists, who include representatives from the investment, academic, and public sectors, will discuss ways that these zones can maximize positive impacts while ensuring that benefits accrue to existing residents, businesses, and community organizations. Speakers include:

The event will take place on Thursday, June 20, from 2:00 pm to 4:00 pm EDT in the Brooke-Mondale Auditorium at HUD Headquarters, 451 7th Street SW, Washington, DC. Interested members of the public are invited to register here to attend either in person or virtually via webcast.