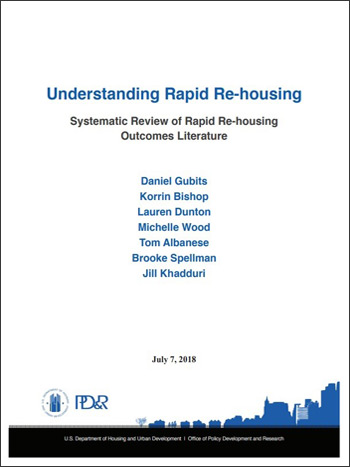 First piloted in the late 1980s, RRH provides short-term rental subsidies, housing search assistance, and case management services to individuals and families who are experiencing homelessness, reducing the amount of time spent in shelters and helping participants to secure permanent housing. HUD began funding RRH in 2009, providing grants to 23 Continuums of Care (CoCs) through the Rapid Re-Housing for Homeless Families Demonstration. Funding for RRH has grown over the past decade: in 2016, HUD funded more than 77,000 RRH beds. The U.S. Department of Veterans Affairs has also invested in RRH through the Supportive Services for Veteran Families (SSVF) program, which served more than 67,000 veterans in 2016.

RRH provides local jurisdictions with flexibility in the amounts and types of assistance provided to participants and allows program administrators to target specific sub-populations based on local and regional need. RRH follows the Housing First approach, meaning that assistance is provided without strict eligibility requirements or disqualification of households who may be least likely to remain housed once the rental assistance period ends.

In the context of the CoC, the goal of RRH is to rapidly move those experiencing homelessness out of shelters to expand the capacity of the CoC to reduce homelessness. A set of practice standards and benchmarks for RRH programs established by the National Alliance to End Homelessness (NAEH) evaluates RRH programs in three areas:

It is important to note that these performance benchmarks were established approximately seven years after the first round of federal grants for RRH were awarded to local communities. Although these benchmarks are useful for providers to assess and track their own performance, numerous factors complicate comparisons across different RRH programs. The programmatic flexibility given to each RRH program, qualitative differences among target subgroups, and local community conditions pose challenges to broad analyses of RRH programs.

As part of the Understanding Rapid Re-housing study, researchers examined the effectiveness of RRH against these benchmarks through a survey of existing research on RRH programs. The researchers identified 76 studies of RRH programs; of these, 43 measured program outcomes that the researchers determined were robust enough to be included in the review.

The first benchmark examines the amount of time that a program participant experiences homelessness after entering an RRH program — for example, the length of time between entering a shelter and participating in RRH, which may coincide with entry into the shelter, and between RRH participation and placement in permanent housing. Only seven of the reviewed studies included data on this measure as well as information on sample size, with the SSVF study presenting the largest sample. For households participating in SSVF, the average time from entry into an RRH program to an exit to permanent housing was 45 days. Other studies, which included smaller samples, show significant variation ranging from 26 days to 145 days. Most of the surveyed programs, however, struggled to reduce the amount of time participants spent homeless to below the 30-day benchmark established by NAEH.

The third performance measure established by NAEH is the proportion of households who remained housed within one year of exiting to permanent housing. The SSVF study presented the largest sample of households for which this outcome was measured; many RRH programs were already in existence before NAEH established their benchmark criteria and often did not capture these data. The SSVF study found returns to homelessness within one year for 16 percent of single individuals and nine percent of families. The evaluation of the Rapid Re-housing for Homeless Families Demonstration (RRHD) found that among the 1,500 families who exited RRH programs, six percent returned to homelessness within one year. Smaller studies showed rates of return to homelessness that were similar to or lower than the results for the SSVF and RRHD studies, with one notable exception. An evaluation of HUD’s Family Options Study found that of nearly 300 families who were given priority access to and used RRH assistance, 23 percent had a stay in an emergency shelter during the one-year period starting six months after study enrollment.

Considering these findings, the researchers determined that the NAEH benchmark of 15 percent or fewer RRH participants returning to homelessness within a year of program exit is appropriate.

Supplemental Analysis of Data from the Family Options Study 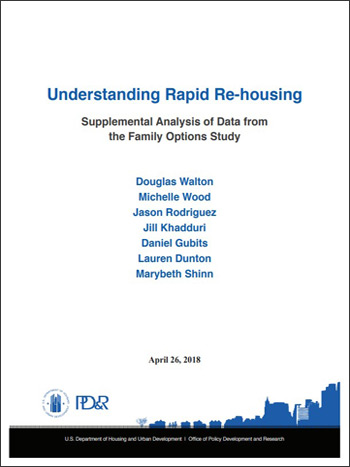 As another component of the Understanding Rapid Re-housing Study, researchers analyzed data collected for the Family Options Study. The researchers examined outcomes among households who participated in RRH as part of the Family Options Study through new analyses of short-term rental subsidies and supportive services provided to program participants. This analysis examines differences in RRH administration among the 12 participating communities, provides data on returns to homelessness for RRH participants, and describes housing quality conditions and rent paid for units obtained through the program. In contrast to the Family Options Study, this supplemental analysis did not include an experimental design; therefore, observed relationships between program utilization and outcomes cannot be attributed solely to the intervention. Rather, the correlations could result from characteristics of the family participating in the RRH program or other extraneous variables.

RRH programs are an important tool for decreasing homelessness among individuals and families. These programs are shown to be less expensive than other interventions and allow considerable flexibility in local program design. This flexibility also creates challenges for evaluating programs and understanding causal relationships between program characteristics and outcomes for participants. These working papers describe existing studies of RRH programs and how they measure up against the benchmarks used to evaluate programs.

In addition to these working papers, the Understanding Rapid Re-housing Study includes original program-level and participant-level research which will catalog the range of program models in use nationwide and contribute to our understanding of the extent to which RRH achieves its intended goals.