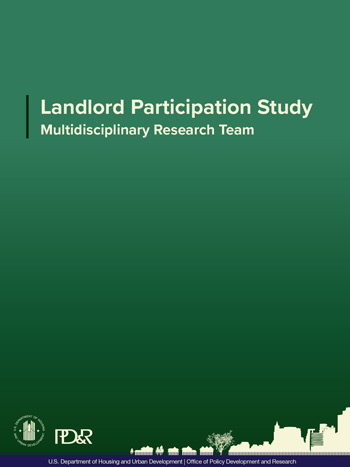 A new research report from the Office of Policy Development and Research’s Multidisciplinary Research Team explores landlord participation in the Housing Choice Voucher (HCV) Program through the perspective of public housing agency (PHA) staff. The research seeks to better understand what factors drive landlord participation in the program and how local PHAs can increase participation rates among landlords. This study builds on two recent studies that examine landlord acceptance of Housing Choice vouchers. The first study, “Urban Landlords and the Housing Choice Voucher Program: A Research Report,” found that many landlords refused to rent to voucher holders because of negative experiences with the program. The second study, “A Pilot Study of Landlord Denial in the Housing Choice Voucher Program” also found clear evidence that vouchers had a low acceptance rate cross the country, with denials more common in low-poverty areas than high-poverty areas.

The study uses a mixed-method research approach that includes both quantitative and qualitative analysis. The research provides insight into PHA staff’s perspectives about landlords’ perceptions of the HCV program and how PHAs can encourage landlord participation in the program. The researchers combined HUD administrative data with neighborhood-level housing, socioeconomic, and demographic data from the American Community Survey to model the neighborhood types that were more likely to have housing choice voucher units.

The researchers combined these data with a qualitative analysis of a purposive sample of PHAs that had promising practices for expanding landlord participation in the HCV program. These included PHAs involved in the Moving to Work (MTW) demonstration, and a few non-MTW PHAs, as well as PHAs that are participating in the Creating Moves to Opportunity project to try to increase housing choice vouchers in high opportunity areas. Researchers interviewed PHA staff to understand their roles and responsibilities, local market conditions, factors influencing landlords’ decisions to participate in the program, activities implemented by PHAs to encourage landlord participation in the program, and the overall effectiveness and scalability of various PHA activities.

The analysis of HUD administrative data on landlord participation in the program suggest that between 2010 and 2016, the number of landlords participating in the program decreased, while the number of vouchers largely remained steady. As a result, the number of voucher households per landlord rose from 2.6 voucher participants per landlord in 2010 to 3.1 in 2016. The data also suggest a correlation between voucher concentration and areas with high poverty rates and that this correlation increased between 2010 and 2016. The analysis finds that neighborhoods in census tracts where HCV units are located typically have lower shares of owner-occupied housing, older homes with lower gross rents, and home values that are $100,000 less than in neighborhoods without HCV units. Overall, the data suggest that higher poverty rates, lower incomes, higher unemployment rates, and higher proportions of Black and Hispanic populations characterize census tracts are more likely to have HCV units. In general, the data show that as a neighborhood becomes wealthier (as measured by poverty rates, unemployment rates, housing value, and owner occupancy), the share of HCV units in that neighborhood decreases.

The survey of local PHA staff underscored the challenges that voucher holders face in securing rental housing. Across all the PHAs studied, local staff identified rising rents and tight rental markets as significant barriers for HCV tenants to find units to rent. Staff also identified the need to extend the timeframe for voucher households to secure housing. They pointed to the tightness of local housing markets as a factor that limited landlords’ willingness to participate in the program. PHA staff noted that local and state laws preventing HCV discrimination based on source of income were useful for helping tenants lease housing through the program.

PHA staff reported that financial considerations and landlords’ perceptions of voucher holders were key factors discouraging landlords from participating in the HCV program. For example, the additional time required to move in a voucher tenant over a market-rate tenant (10 or more days for voucher holders versus 2 to 3 days for market-rate tenants) can be a deterrent for landlords, since this is added time they are losing rental income. The upper limits on payment standards are also a significant barrier, particularly in tight rental markets. Not surprisingly, landlords who can charge a higher rent on the open market than to a voucher household will rent their unit to a market-rate tenant. In addition to financial considerations, landlords also cited the challenges of working with PHAs and the bureaucratic and administrative burdens as deterrents of participating in the program.

Among the tools that PHA staff have implemented to increase landlord participation in the HCV Program, the most frequently cited effective strategy was the ability to increase the payment standard for voucher units. Although staff noted the importance of increasing payment standards, they pointed out that these standards should be carefully developed. Other promising strategies included reducing unit inspection times, providing security deposits, offering incentive bonuses to landlords, and creating landlord/owner liaisons to limit barriers and incentivize involvement in the program.

This research builds on HUD’s efforts to better understand landlord participation in the HCV Program. The study underscores the continued challenge voucher holders face in securing rental housing, particularly in low-poverty, high-opportunity neighborhoods. Despite these challenges, the survey of PHA staff highlights some promising strategies that can encourage landlord participation, such as having payment standards that are competitive with market-rate rents and having streamlined administrative processes that minimize the time and burden for landlords.