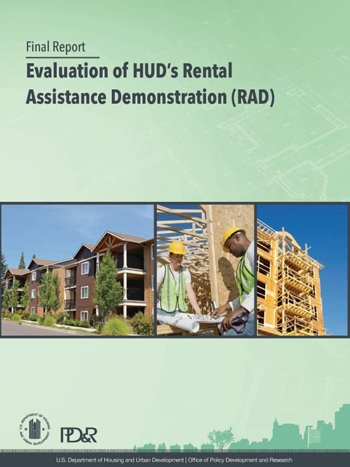 A new study presents the culmination of research that began in 2014 on the Rental Assistance Demonstration (RAD), which aims to curb the loss of public housing. RAD is a voluntary program that allows public housing agencies (PHAs) to convert public housing projects to either Project-Based Voucher (PBV) or Project-Based Rental Assistance (PBRA) contracts. By moving units to the Section 8 platform, the properties are able to leverage private funding. RAD projects use funds to undertake upfront construction to renovate existing buildings or demolish aging structures and construct new ones. RAD projects also establish replacement reserve accounts in anticipation of future rehabilitation costs. The RAD program includes significant resident protections to ensure they see the benefits of these renovations.

This evaluation meets Congress’s requirement to report on the early observable impacts of RAD on — (1) the preservation and improvement of former public housing units, (2) the amount of private capital leveraged as a result of such conversion, and (3) the effect of conversion on residents. Overall, the study found that RAD has been extremely successful at attracting capital to stabilize and improve public housing. From the program’s inception in November 2011 through the end of October 2018, a total of 956 public housing projects with 103,268 units of affordable housing converted to Section 8, and raised a total of $12.6 billion, an average of $121,747 per unit. RAD projects have used these funds to improve physical and financial conditions and appear to be on a stronger financial footing for the future. Based on tenant surveys, RAD projects have also been successful at mitigating the possible negative effects on tenants.

Researchers undertook a multiphase evaluation of the RAD program using a mixed-method approach. The 2016 interim report outlined the research design for the first phase of the evaluation, which created two samples ― the first to assess the physical and financial impact of RAD, and the second to assess the impact of RAD on residents. For the physical and financial impact component, the research team selected a matched sample of 24 RAD projects (the treatment group) that had converted or were about to convert to Section 8 and 48 nonparticipating public housing projects (the control group). The researchers collected baseline data including physical capital assessments (PCAs) and financial records from before RAD conversions. For the resident impact component, the research team selected a sample of 19 RAD projects and invited 1,669 households to participate in the study. Of this group, 522 households enrolled. The research team tracked these residents through the duration of the RAD conversion so they could survey them afterwards in the second phase of the study.

This final report describes findings from the second phase of the evaluation. The researchers conducted followup PCAs and collected another round of financial records from the RAD sample and control group to determine the physical condition and financial stability in the time period after RAD conversions had been completed. To assess resident impacts, the research team asked the 522 households that had enrolled in the study to complete a survey. Of those enrolled, 318 completed a survey, but the researchers analyzed only 298 of these because one project did not complete a conversion.

Separate from these components of the evaluation, researchers also analyzed program data to assess financing for the universe of completed RAD conversions. Researchers also interviewed PHA and HUD staff and other stakeholders to learn about their perspectives on the RAD program.

RAD gives PHAs the financial leverage to rehabilitate and preserve affordable housing units and meet short-term capital needs. The report defines five leverage ratios that show the amount of funding raised per dollar of HUD funding committed. The ratios vary depending on how the funds raised are grouped together (public funds, private funds, etc.) For example, the public housing appropriated funds ratio gauges whether RAD can leverage additional funding beyond what is provided through HUD’s public housing programs. Researchers determined that for every dollar of public housing funds, RAD conversions leveraged an additional $9.66 in funding — the largest of all RAD leverage ratios. Federally appropriated funds have the second-largest RAD leverage ratio, with $8.34 leveraged in funding for every dollar spent, including appropriations for public housing, the HOME Investment Partnerships Program, the Community Development Block Grant program, and other programs.

Such funding sources helped property owners undertake rehabilitation projects to improve their properties’ physical condition, including improvements to roofs, exterior doors, windows, cladding, floors, walls, ceilings, management offices, recycling receptacles, heating and cooling systems, and kitchens. Followup PCAs conducted after conversion revealed that the physical condition of the buildings improved and capital needs decreased in nearly all categories except for the mechanical and electrical, common area, elevator, and water system categories. Based on initial and followup PCAs, researchers determined that, on average, short-term capital needs among RAD properties in the treatment group declined from $12,981 per unit pre-conversion to $4,608 per unit post-conversion — a reduction of $8,373 per unit, or 65 percent. On the other hand, short-term capital needs for non-RAD projects in the control group rose from $3,740 per unit on average to $8,710 per unit, representing an increase of $4,970 per unit, or 133 percent.

Interviews with PHAs shed light on property management practices during the conversion process. Of the PHAs interviewed, about 25 percent use private property managers to manage their converted projects, and the rest continue to use their own staff to manage projects and have revised their policies and procedures to adapt to RAD. Approximately 75 percent of PHAs said that the changes under RAD were neutral or beneficial, and about 25 percent indicated that they had concerns about the changes. PHAs recognize the need to realign, retrain, and hire staff to adjust to new guidelines and data systems.

Tenant surveys revealed high levels of satisfaction with the conversion process. The researchers determined that 79 percent of tenants were very or somewhat satisfied with PHAs’ communications about RAD, and 76 percent were very or somewhat satisfied with the management of the RAD process. Most of the tenant survey respondents indicated that they were very or somewhat satisfied with their housing unit and the development, which includes the physical quality and management. More than 90 percent of tenants reported that the housing and development were better or about the same as they were before the conversion. In addition, 82 percent of respondents stayed in the same property during the RAD conversion process, either in their original unit or in a different unit at the same property. Those who relocated because of RAD received relocation assistance, and most were satisfied with it.

The RAD program has grown significantly over the past 5 years and is now capped at 455,000 units, up from the initial 60,000 units. This study focused on early adopters of RAD, whose experiences may differ from those of current properties undergoing conversion. The program will continue to evolve, leading to changes in guidelines and the mix of PHAs and projects that participate. Overall, this study indicates that the program met its goals to leverage capital; preserve affordable housing by meeting short-term capital needs; and alleviate possible negative effects on tenants, such as relocation. PHAs, lenders, developers, HUD staff, and the researchers proposed several policy recommendations to HUD, such as additional financial support for projects having difficulty meeting their capital needs, training and technical assistance for PHAs in post-conversion management, guidance and best practices to facilitate tenant relocation, improved communication and transparency, and a streamlined closing process.