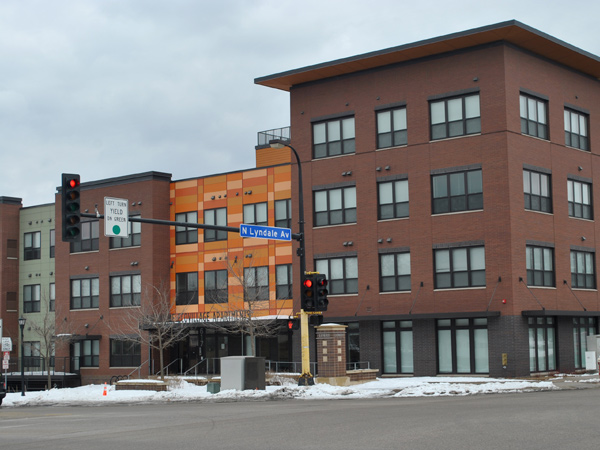 The Hawthorne EcoVillage Apartments add 75 units of affordable housing as part of an effort to revitalize a neighborhood in north Minneapolis, Minnesota. Credit: Project for Pride in Living

In north Minneapolis, Minnesota, affordable housing is transforming a long-declining neighborhood hard hit by the foreclosure crisis and Great Recession. The Hawthorne EcoVillage Apartments do more than add needed housing to the neighborhood; as part of a larger strategy of neighborhood change, developers involved residents in the urban planning process, addressed public health and safety concerns, prioritized positive ecological outcomes, and stabilized and rehabilitated housing throughout the neighborhood. Although Hawthorne EcoVillage Apartments represents only one component of the area’s redevelopment, the development embodies the vision animating the social, economic, and physical revival of an entire neighborhood.

Hawthorne EcoVillage Apartments consists of 75 units of housing affordable to tenants earning up to 50 percent of area median income (AMI), with 4 studio-sized units further restricted to residents earning up to 30 percent of AMI. The unit mix includes 10 studio, 37 one-bedroom, 19 two-bedroom, and 9 three-bedroom units. Project development costs totaled $18 million, financed through 4 percent low-income housing tax credits as well as more than a dozen other sources assembled over seven years. The diverse array of funding sources, including financing from the Hennepin County Transit Oriented Development program, the Mississippi Watershed Management Organization, and the Hennepin County Environmental Response Fund, supports the ecological and wellness ambitions of the project. Amenities include a fitness room, bike storage, and community space that helps open the project to neighborhood residents.

The Hawthorne EcoVillage Apartments, which was completed in November 2017 and fully leased up over the following three months, includes features that enhance the health of the local environment as well as residents. A green roof and landscaping designed to manage stormwater help protect the nearby Mississippi River. An energy-efficient mechanical system and building envelope reduce the building’s ecological footprint as well as utility costs. Bike storage complements an earlier improvement project to Lowry Avenue, a main thoroughfare fronting EcoVillage Apartments, that added a bike lane. 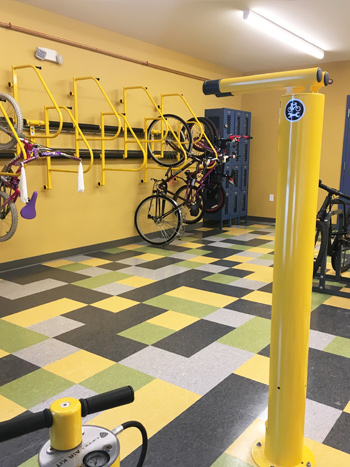 Amenities at the Hawthorne EcoVillage Apartments include bike storage, complementing an earlier street improvement project that added a bike lane to the neighborhood’s main thoroughfare. Credit: Project for Pride in Living

These features reflect the overall environmental ambition of the Hawthorne EcoVillage, a four-block cluster within Hawthorne targeted for redevelopment. In part a branding strategy intended to help attract funding and new residents, the moniker reflects concrete action taken to transform the neighborhood. In its first 5 years, a tree nursery established in the EcoVillage has grown and given away more than 150 trees for residents to plant. A community garden promotes healthy eating and social connection among residents, while gardens alongside EcoVillage streets planted by residents, including young people, are designed to retain water while visually enhancing the streetscape. The focus on eco-conscious design stems from the engagement process undertaken by the developer of the Hawthorne EcoVillage Apartments, Project for Pride in Living, which has a long history in the neighborhood. Through workshops, area residents expressed hopes for efficient and renewable energy; a design that promotes a range of housing and transit options; and functional landscapes to filter stormwater, provide shade, and activate community spaces.

The “cluster” strategy for urban redevelopment is intended to maximize the efficiency of finite redevelopment resources, according to Abbie Loosen, associate director of real estate development at Project for Pride in Living. Intervention at too small a scale — rehabilitating individual buildings scattered throughout a neighborhood — results in completed projects that still experience the deleterious effects of adjacent urban distress. On the other hand, intervention at too large a scale is simply not feasible with limited available resources. Clusters of four to six city blocks allow for closely located interventions that build on and reinforce one another, maximizing and magnifying the positive effects of each individual project. This strategy was important for the Hawthorne neighborhood, where 15.5 percent of all residential properties were in foreclosure in 2007, and distressed properties were enabling illicit and dangerous activity.

The most severely dilapidated buildings were acquired and demolished, and improvements were made to main thoroughfare, creating space for new construction, including the EcoVillage Apartments. Some properties were suitable candidates for rehabilitation, helping to preserve the historic significance of the neighborhood. This sustained effort has resulted in improved neighborhood stability. In just two years, the neighborhood’s violent crime rate dropped by 73 percent. Over five years, the homeownership rate in the Hawthorne EcoVillage cluster nearly doubled. Other owner-occupier families have moved into housing in adjacent areas, demonstrating the positive spillover effect of the cluster model. The Hawthorne EcoVillage Apartments may represent only a portion of the effort to revitalize the Hawthorne neighborhood, but it demonstrates the importance of including affordable housing in comprehensive, inclusive, and persistent efforts to improve neighborhood conditions that are responsive to residents’ expressed needs.

Is this an answer?