A New Era of Homeownership 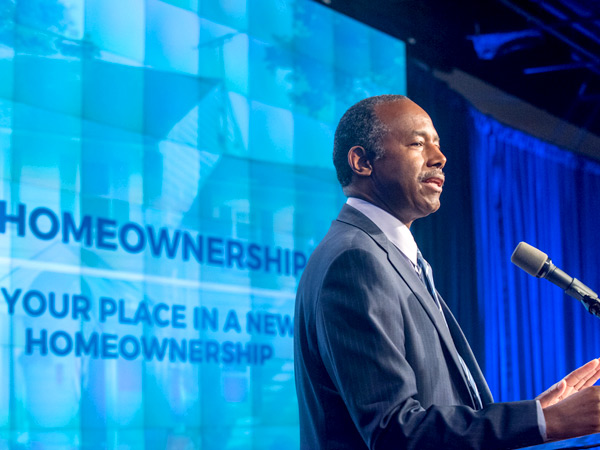 HUD Secretary Ben Carson began the event by highlighting the importance of homeownership.

On June 1, 2017, HUD kicked off National Homeownership Month by hosting A New Era of Homeownership, a forum that brought together a diverse group of experts to examine current forces at work in the nation’s housing markets. HUD Secretary Ben Carson delivered the keynote address, in which he highlighted the importance of homeownership. “After all we’ve been through, homeownership remains an American value and the cornerstone of our economy,” said Secretary Carson. “The importance of homeownership is apparent to all of us: security, certainty, safety, wealth creation, a path forward, self-sufficiency, [and] a place to live with loved ones. Today, we recognize the abiding value of owning a home and rededicate ourselves toward ensuring that every hardworking and creditworthy American enjoys a fair chance at becoming a homeowner.” CNBC correspondent Diana Olick then moderated the National Homeownership Forum, in which panelists discussed the benefits of homeownership and the challenges faced by millennial purchasers as they enter the housing market.

The Benefits of Homeownership

Reinforcing Secretary Carson’s assertions about the importance of homeownership, the panelists highlighted the many benefits of owning a home. According to Joel Kan, associate vice president of industry surveys and forecasts for the Mortgage Bankers Association, and Christie Peale, executive director of the Center for NYC Neighborhoods, mortgage payments are more affordable than rents in many markets. Jon Spader, senior research associate at the Joint Center for Housing Studies of Harvard University (Joint Center), observed that homeownership offers stability because monthly mortgage payments are predictable over the life of the loan, whereas rents can increase year over year.

Homeownership also offers stability for families by enabling them to remain in the same community, which can help children avoid some of the negative effects of frequent relocation, such as declines in school performance. Spader and Lawrence Yun, chief economist and senior vice president of research for the National Association of Realtors, added that homeownership could lead to positive outcomes in health, education, and child well-being for households. In addition to these social benefits, homeownership offers households the potential to build wealth. “We are looking at some pretty significant gaps in asset building among different racial groups,” noted Peale, “[and homeownership] is not the only solution, but it’s a pretty critical solution.” Spader highlighted research from the Joint Center that analyzed a set of households between 1999 and 2013 and found that the median renter household who became a homeowner household and sustained homeownership experienced an $85,000 increase in net wealth, whereas the net wealth of the median renter households who continued renting remained the same. 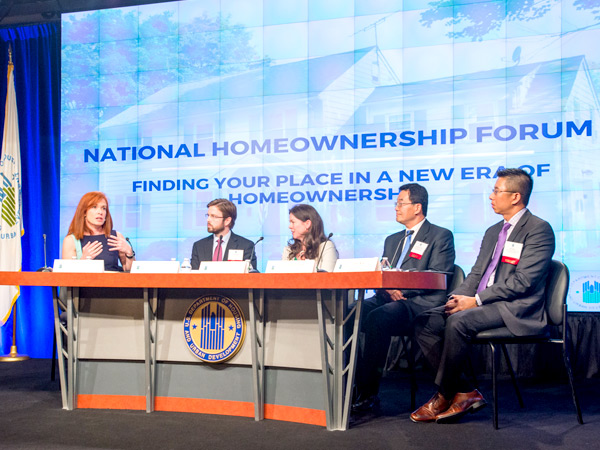 CNBC Real Estate Reporter Diana Olick moderated the National Homeownership Forum, in which a panel of experts highlighted the benefits of homeownership and described the challenges faced by millennial households seeking to purchase a home.

According to Spader, consistent time series data are not yet available to determine whether millennials are uninterested in homeownership or are simply delaying home purchases. Spader presented survey data indicating that across all age groups, 83 percent of people either own a home or expect to own one in the future. Nearly 90 percent of those under age 30 either owned a home or anticipated owning a home in the future, suggesting that millennials have a high degree of interest in becoming homeowners at some point. However, millennials who aim to purchase a home may face several barriers, such as access to credit and downpayment requirements.

The panelists noted that millennials without a sufficient credit history or a high credit score might be unable to obtain mortgages in the current housing finance climate. Millennial households may also need time to save enough money for a downpayment. In addition, these households may believe that they need a 20 percent downpayment and are unaware of options such as loans insured by the Federal Housing Administration that have lower downpayment requirements, according to Olick and Yun.

Affordability is another barrier for entry-level homebuyers. According to Yun, housing prices have risen in response to insufficient supply. Although affordability in the United States varies by region, wages have not kept pace with the increases in the cost of housing nationally, meaning that a median income buyer can access a smaller percentage of the available inventory of homes. And of the new homes that are built, few tend to be affordable to low- and moderate-income households.

Even millennials who can save for a downpayment, obtain a mortgage, and find an affordable home face competition from investors who may prevent them from purchasing that home. “Even when there is a home that would be affordable to a working family who has good credit and can get a mortgage, [the family is] beaten by someone with cash, looking to buy low, put in a little bit of money, and flip [the home],” said Peale.

Panelists recommended many strategies to address the barriers that prevent renters, including millennial households, from becoming homeowners, but they also emphasized that policymakers must evaluate these interventions to determine their benefits for homeowners, the community, and the tax base. Yun suggested that increasing supply, potentially by providing incentives for builders, might help ensure a sufficient inventory of affordable homes for millennial buyers. The panelists also recommended that organizations, lenders, and state and local governments review their homebuyer assistance tools and programs to ensure that they meet borrower needs. According to Peale, downpayment assistance programs could be refined to allow more assistance to homeowners in high-cost areas, and loans could be structured to allocate funding for repairs in areas where affordable homes need maintenance.

In addition, panelists stressed the need for housing counseling, which is the subject of an ongoing HUD demonstration, while preparing for homeownership and throughout the life of the loan. According to Peale and Yun, unexpected costs from life events such as medical emergencies can cause some homeowners to become delinquent or experience foreclosure. Homeowners who have experienced foreclosure, noted Yun, lost all the positive social outcomes of homeownership. Spader also cited findings from the Joint Center report indicating that median net wealth declined for renter households who became homeowner households and then returned to renting, possibly due to foreclosure. Pre- and postpurchase housing counseling are low-cost interventions that can help avoid these negative financial and social outcomes.

The Future of Homeownership

Time and data collection efforts will help to determine whether the homeownership rate among millennial households will increase as millennials begin having families. Spader was optimistic about the prospects for millennials to become homeowners in the future, stating that “there is a consistent trend [of] delay in household formation…, marriage, and childbirth, but that points to a delay in entry to homeownership and not a reduction in the number of households that eventually attain homeownership.” Addressing the barriers to homeownership will be an important step toward ensuring that these households are able to attain and reap the benefits of homeownership when they are ready.